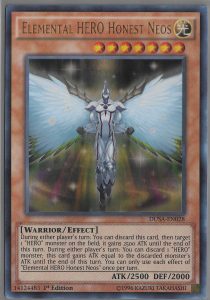 Elemental HERO Honest Neos’s first effect discards this card from your hand, and one HERO monster on your field gains 2,500 ATK. This is a quick effect that can be used at any time. In addition, this effect is perfect to play during the battle phase. Your opponent will be caught by surprise, and your HERO monster can win a battle against your opponent’s monster. Then, you deal serious damage to your opponent.

Elemental HERO Honest Neos’s second effect discards a HERO monster from your hand, and he gains ATK equal to the discarded monster’s ATK. This effect is  similar to the first effect. It is also very effective in every HERO deck. You increase Elemental HERO Honest Neo’s ATK to destroy an opponent’s monster. I enjoy this strategy to destroy a monster and prepare the graveyard for fusions.

Furthermore, Elemental HERO decks enjoy sending monsters to the graveyard. This strategy sets up fusions with Miracle Fusion. You are using your Elemental Heroes in your graveyard as material for fusions. This is a great strategy for fully using your resources. Then, you will special summon a powerful Elemental HERO from your extra deck!