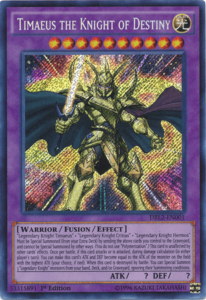 Must be Special Summoned (from your Extra Deck) by sending the above cards you control to the Graveyard, and cannot be Special Summoned by other ways. (You do not use “Polymerization”.) This card is unaffected by other cards’ effects. Once per battle, if this card attacks or is attacked, during damage calculation (in either player’s turn): You can make this card’s ATK and DEF become equal to the ATK of the monster on the field with the highest ATK (your choice, if tied). When this card is destroyed by battle: You can Special Summon 3 “Legendary Knight” monsters from your hand, Deck, and/or Graveyard, ignoring their Summoning conditions.

Waking the Dragons introduced many popular cards such as Dark Magician Girl the Dragon Knight, The Eye of Timaeus, and Legendary Knight Critias. They have finally been released in Dragons of Legend and Dragons of Legend 2. The three Legendary Knights of Atlantis fought alongside Yugi and his friends. They combine their powers to form the almighty Timaeus the Knight of Destiny! Atem played Timaeus the Knight of Destiny in his epic duel against my favorite villain Darts! His infinite power was too much for Darts and led Atem to victory.

Furthermore, have a strong monster on the field to increase Timaeus the Knight of Destiny ATK. You may also choose your opponent’s strongest monster to increase his ATK. He crashes into an opponent’s monster to destroy it!

Furthermore, losing Timaeus the Knight of Destiny is not a major lost. I see it as a huge gain. The three Legendary Knights return to the field after Timaeus the Knight of Destiny is destroyed by battle. Their effects are much better than their fusion form. You will be able to gain advantage from their skills that allow you to banish spell cards and cards when they are attack. Critias’s skill sets a trap from your graveyard, and Timaeus’s skill sets a spell card from your graveyard.