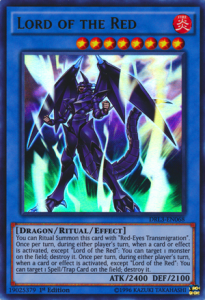 Lord of the Red is a Ritual Monster in the Reyes archetype. I am impressed by the card’s artwork. His awesome artwork is based on his appearance in the anime. His design is perfect for a warrior in an armor similar to Red-Eyes Black Dragon. Lord of the Red has two impressive effects that elevate his archetype.

Unfortunately, Joey never summons Lord of the Red ever again in the series. It could had become a signature card in his deck. I would have liked to see him play the card in other duels. Lord of the Red would have been a formidable opponent for Kaiba. Joey would have a far better chance at defeating Kaiba and Yugi.

Lord of the Red’s second effect destroys a spell or trap card when a card’s effect is activated! I like this effect more than the first effect. It is the perfect counter to destroy the opponent’s continues traps or field spells. You are turning the tide of the duel on your side. You are removing a key card to your opponent’s strategy.

Finally, Lord of the Red’s design offers options to players in particular situations. He is always an active card on the field. You always have the option to destroy a card as long as your opponent controls a card. For example, you may destroy a continuous trap when your opponent activates a card’s effect. If the opponent’s only card on the field is a monster, then Lord of the Red’s first effect destroys the monster.

Play these cards with Lord of the Red!

Overall, Lord of the Red is one of Joey’s best monsters, and is a powerful Ritual Monster for Red-Eyes decks. He is a great monster for controlling the field. Lord of the Red destroys your opponent’s best cards on the field. I recommend playing two to three copies in a deck. The deck needs to focus on him as the headliner of the deck.