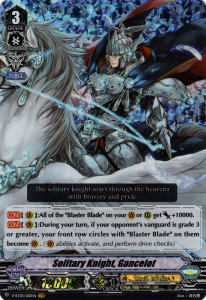 The solitary knight soars through the heavens with bravery and pride.

[CONT](VC):All of the “Blaster Blade” on your (VC) or (RC) get [Power]+10000.
[CONT](VC):During your turn, if your opponent’s vanguard is grade 3 or greater, your front row circles with “Blaster Blade” on them become (VC). ((VC) abilities activate, and perform drive checks)

Play these cards with Solitary Knight, Gancelot in the standard format!

The legendary Blaster Blade becomes a vanguard with the second ability, and each Blaster Blade in the front row has a drive check! It is one of the best formations in the game. You have a total of four drive checks for the turn with two Blaster Blades on the field. Thus, you have a higher chance of checking a trigger, and you are adding four cards to your hand. The ability has a great offensive strategy with three vanguards, and it strengthens your defense.

Overall, Solitary Knight, Gancelot is an amazing card for the standard format, and is a unique card for the premium format. Players have many options on building a deck for Blaster Blade. Solitary Knight, Gancelot is one of the best options for building your deck. He elevates Blaster Blade’s value for Royal Paladins. His true value shines in the standard format. The dynamic duo has an amazing display of offense.