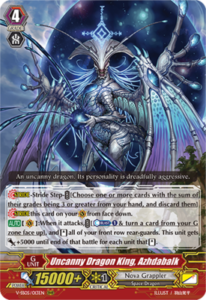 An uncanny dragon. Its personality is dreadfully aggressive.

[Stride]-Stride Step-COST [Choose one or more cards with the sum of their grades being 3 or greater from your hand, and discard them], Stride this card on your (VC) from face down.
[AUTO](VC):When it attacks, COST [Counter Blast (1) & turn a card from your G zone face up], and [Stand] all of your front row rear-guards. This unit gets [Power]+5000 until end of that battle for each unit that [Stand].

First, I want to discuss this card’s odd artwork. I normally focus on a card’s abilities, but I need to clear the air about the artwork. Uncanny Dragon King, Azhdabalk has a strange and unrecognizable design for a Nova Grappler. The clan is known for robots and wrestlers. This dragon does not fit the Nova Grappler’s theme. Players may look at the illustration assume it is a Dimension Police before reading the clan’s label on the card.

In addition, Uncanny Dragon King, Azhdabalk gains at least 15,000 power. Your front row requires three rear-guards to gain this amount of power. Your vanguard can reach high numbers above 40,000.

Unfortunately, this ability has its shortcomings. The rear-guards in the front row do not gain power from this ability. While you are standing multiple rear-guards, your opponent can easily block those attacks. An opponent may not need to guard if he or she checked a damage trigger. Then, your rear-guard are unable to hit the opposing vanguard.

Consider these G-Units for your Nova Grappler deck!