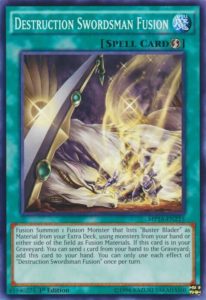 Fusion Summon 1 Fusion Monster that lists “Buster Blader” as Material from your Extra Deck, using monsters from your hand or either side of the field as Fusion Materials. If this card is in your Graveyard: You can send 1 card from your hand to the Graveyard; add this card to your hand. You can only use each effect of “Destruction Swordsman Fusion” once per turn.

Destruction Swordsman Fusion uses cards from your hand and any other monsters on either side of the field as fusion material. You can fusion summon a fusion monster that lists Buster Blader as material. The archetype has multiple monsters in the extra deck.

Furthermore, the best strategy is using an opponent’s monster for fusion material. The opponent loses a monster, and you gain a powerful fusion monster. This strategy may deplete the opponent’s field of any monsters. You have an opportunity for a direct attack.

Furthermore, this effect enables you to perform many fusion summons during a game. An opponent may destroy one of your monsters. The second effect of Destruction Swordsman Fusion provides the opportunity for you to play it again and reestablish a strong field.