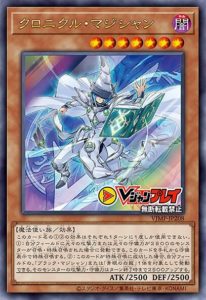 If a monster(s) with 2500 original ATK and/or DEF is Normal or Special Summoned to your field: You can Special Summon this card from your hand in Defense Position. If this card is Special Summoned: You can target 1 “Dark Magician” or “Blue-Eyes White Dragon” you control; it gains 2500 ATK/DEF until the end of this turn. You can only use each effect of “Chronicle Magician” once per turn.

Chronicle Magician special summons himself in defense position from your hand if you normal or special summon a normal monster with 2,500 ATK or DEF. A special summon without a cost is a nice advantage because you do not pay any resources. Your field gains a free monster.

Furthermore Chronicle Magician’s first and second effects complement him. He special summons himself to the field and adds ATK to either Dark Magician or Blue-Eyes White Dragon. He triggers both of his effects on the same turn.

Play these cards with Chronicle Magician!

Chronicle Magician is also great material for XYZ summons. Chronicle Magician is unable to use his affects after his first turn, and you can use him for a summon. He has is a level seven monster. Yu-Gi-Oh! has many powerful ranked seven XYZ monsters with amazing effects.

Furthermore, you have the perfect conditions for a XYZ summon. Chronicle Magician and ark Magician are level seven monsters. They are both on your field at the same time. You have the materials for a summon of a rank seven XYZ monster.