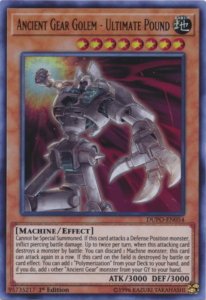 Cannot be Special Summoned. If this card attacks a Defense Position monster, inflict piercing battle damage. Up to twice per turn, when this attacking card destroys a monster by battle: You can discard 1 Machine monster; this card can attack again in a row. If this card on the field is destroyed by battle or card effect: You can add 1 “Polymerization” from your Deck to your hand, and if you do, add 1 other “Ancient Gear” monster from your GY to your hand.

Furthermore, this effect limits the opportunities with this monster. It will be difficult to replay this card after an opponent destroys it. You will not be able to special summon it from the graveyard with cards such as Monster Reborn.

Ancient Gear Golem – Ultimate Pound has one of Ancient Gear Golem’s effects. This mighty Machine Monster inflicts piercing battle damage! This effect provides effective offense. An opponent cannot protect his or her life points with a monster in defense position! You can inflict damage at any time during the battle phase.

Furthermore, this effect is a very good ability against decks that swarm the field. has an advantage against archetypes such as Six Samurai. Your opponent most likely have many monsters on the field, and you can activate this effect one or two times in a turn.