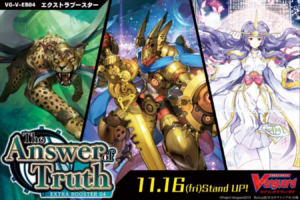 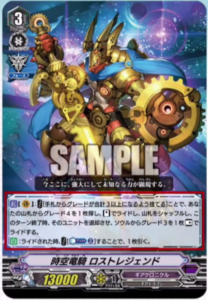 ACT (VC): COST [Discard a total of cards from your hand whose Grades equal 3 or more], search your Deck for up to 1 Grade 4 card, Ride it at Stand, shuffle the Deck, when your turn ends, Retire that Unit, then Ride 1 Grade 3 card from your Soul at Rest.
AUTO: When this card is Ridden, COST [Counter Blast 2], draw 1 card.

We have our first look at the new Gear Chronicle! Interdiemsnional Dragon Knight, Lost Legend’s skill discards a total of cards whose Grades equal three or more, and superior rides a Grade 4 unit from the deck. The skill is very similar to Stride. The skill has the same cost, and rides a Grade 4 card. The only difference is the Grade 4 card comes from the deck instead of the G Zone.