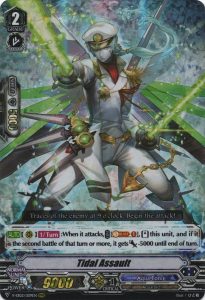 Traces of the enemy at 9 o’clock. Begin the attack!

Tidal Assault is one of the most influential cards in the history of Cardfight!! Vanguard. I do not think any other card maintained value in every format since its introduction. The original card stood the test of time. It was the most valuable rare card for many Aqua Force decks from its introduction to the end of Cardfight!! Vanguard G. The new Tidal Assault is stronger than his previous self.

Tidal Assault skill stands him and if it is the second battle of the turn, he loses 5,000 power. This ability gives you an extra attack for the turn. You can target either a rear-guard or a vanguard for your first attack. I may attack a rear-guard to remove my opponent’s interceptor from the field. Always attack with Tidal Assault first to maintain his power.

Furthermore, an experienced opponent will most likely attempt to retire Tidal Assault to prevent you from gaining an extra battle every turn. I suggest retaining any extra copies to call later if your opponent retires him. You only need one Tidal Assault on the field for combat. I would not guard any attack directed at him. It would be wasting a shield, and I can just call a new Tidal Assault on my next turn.

Play these vanguards with Tidal Assault!

Overall, Tidal Assault is Aqua Force’s best rear-guard for the front row. I see Tidal Assault riding the waves for years to come. Tidal Assault is the heart and soul of the Aqua Force. His ability to gain an additional attack boosts your offense. You have many options on raising his power to guarding more difficult for your opponent.