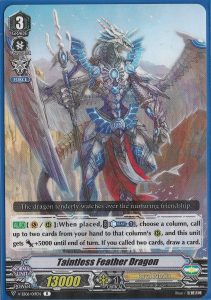 The dragon tenderly watches over the nurturing friendship.

[AUTO](VC/RC):When placed, COST [Counter Blast (1)], choose a column, call up to two cards from your hand to that column’s (RC), and this unit gets [Power]+5000 until end of turn. If you called two cards, draw a card.

Taintless Feather Dragon is an original card for the standard format in Cardfight!! Vanguard. This card is included in Light of Salvation, Logic of Destruction. In addition, this card has a single ability for the vanguard or rear-guard circles. Taintless Feather Dragon has the Force marker, and this makes him a possible option for budget decks. You gain a Force marker when he becomes your vanguard.

Unfortunately, Taintless Feather Dragon does not fit well in many of Royal Paladin’s current decks. Only a few cards have synergy with him, and other units are better backup vanguards. Furthermore, Royal Paladin has more effective vanguards for budget decks such as Alfred Early and Soul Saver Dragon. Your deck may not have any room to add him. This card needs more support, and players can build a proper deck for him.

Overall, Taintless Feather Dragon is a decent vanguard for a budget deck. I would recommend new players to start with a card like this. His ability is simple, and players can create a few combos. If you are planning to build a competitive deck, then Taintless Feather Dragon is not the card for you. He does not generate a major advantage to swing a game in your favor.