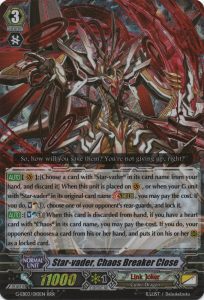 So, how will you save them? You’re not giving up, right?

[AUTO](VC):[Choose a card with “Star-vader” in its card name from your hand, and discard it] When this unit is placed on (VC), or when your G unit with “Star-vader” in its original card name Stride, you may pay the cost. If you do, Soul Charge (1), choose one of your opponent’s rear-guards, and lock it.
[AUTO]:[Soul Blast (1)] When this card is discarded from hand, if you have a heart card with “Chaos” in its card name, you may pay the cost. If you do, your opponent chooses a card from his or her hand, and puts it on his or her (RC) as a locked card.

Overall, Star-Vader, Chaos Breaker Close has become one of my favorite Star-vaders. His second skill makes him a very attractive card to be the second option to discard for Stride. He locks a card after you pay the cost to stride a G-Unit. This skill can be used at any time when you discard a card. You will often use the skill after striding a G-unit with Chaos in its name. Destroy the world in despair with Star-Vader, Chaos Breaker Close!