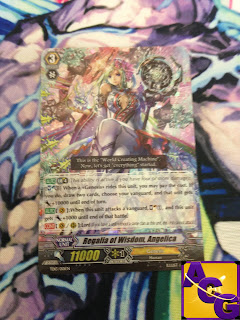 This is the “World Creating Machine”. Now, let’s get “everything” started.

[AUTO] Limit Break 4 (This ability is active if you have four or more damage):[Soul Blast (3)] When a «Genesis» rides this unit, you may pay the cost. If you do, draw two cards, and choose your vanguard, and that unit gets [Power]+10000 until end of turn.
[AUTO](VC):When this unit attacks a vanguard, Soul Charge (1), and this unit gets [Power]+1000 until end of that battle.
[CONT](VC/RC): Lord (If you have a unit without a same clan as this unit, this unit cannot attack)

Regalia of Wisdom, Angelica is the leader of Regalia. She is original Regalia unit before it became an archetype in Legion Mate. She is armed with supernatural powers that are beyond a person’s imaginations. Angelica’s beauty is unmatched and her intelligence trumps brutality. Her true is Omniscience Regalia, Minerva, one of Cray’s original creators. I would expect one of Cray’s creators to be at least a grade 4, but her character came before the Stride generation.

Her Break Ride skill is the best one of its kind for Genesis. You get two free cards for just riding your vanguard and soul blasting three cards. Drawing two cards is a major advantage. You can easily set up her Break Ride skill by soul charging when Angelica attacks your opponent’s vanguard! Guard Angelica with Apple Witch Cider to use her skill to rapidly build your soul. You can put six cards into the soul with a single play by guarding with Cold Blast Regalia, Svalinn and randomly placing Apple Witch Cider into the guardian circle to guard.

Furthermore, her Cross Ride Omniscience Regalia, Minerva thrives off of her Break Ride skill. Angelica is more than just a simple base for Minerva. Angelica’s Break Ride skill helps pay for the cost of discarding three cards for Minerva’s Limit Break. The additional power is a huge bonus for when Minerva stands back up for a second attack. Her power will be 28K before receiving additional power from a booster.

Overall, Regalia of Wisdom, Angelica is an excellent Break Ride unit for Genesis. She gives you so much advantage for a small cost. The two draws from your deck will give a nice increase to your hand size. You will gain or maintain hand advantage during your match if you Break Ride her on top of herself multiple times in a match. Play her with Minerva or experiment with different grade 3 units such as Onmyo Regalia, Nega-keiopojisis.