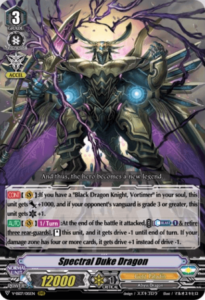 And thus, the hero becomes a new legend.

[CONT](VC):If you have a “Black Dragon Knight, Vortimer” in your soul, this unit gets [Power]+1000, and if your opponent’s vanguard is grade 3 or greater, this unit gets [Critical]+1.
[AUTO](VC)1/Turn:At the end of the battle it attacked, COST [Counter Blast (1) & retire three rear-guards], [Stand] this unit, and it gets drive -1 until end of turn. If your damage zone has four or more cards, it gets drive +1 instead of drive -1.

Spectral Duke Dragon was one of the most popular cards from the era of Limit Break. It has a similar style to Phantom Blaster Dragon. Both cards are powerful dragons and they stand after battle for an additional attack. Spectral Duke Dragon gains new abilities from the sacrifices of his fellow Gold Paladins.

Furthermore, Spectral Duke Dragon becomes a vanguard with 13,000 power at all times. The additional power also adds defense. You can easily block a few attacks with fewer cards than usual for Gold Paladins.

Spectral Duke Dragon has the illustration and ability of a Shadow Paladin in a Gold Paladin. Spectral Duke Dragon stands after battle for the cost of one counter blast and retiring three rear-guards. You have two attacks from the vanguard. You have more opportunities to damage the opponent and check the deck for triggers.

Furthermore, the second ability resembles Limit Break from the original card. You gain an additional drive check if you have four or more damage instead of losing a drive check. This perk negates the cost of retiring three rear-guards. You break even with triple drive.

Play these cards with Spectral Duke Dragon (V Series) in the standard format!

Furthermore, Gold Paladin has many generic G-Units. You can easily play these generic cards with Spectral Duke Dragon. One of the best G-Units to play is Golden Dragon, Brambent Dragon because you can set up multiple attacks during the battle phase.

Play these cards with Spectral Duke Dragon (V Series) in the premium format!