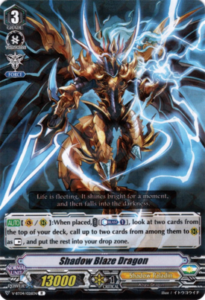 Life is fleeting. It shines bright for a moment, and then falls into the darkness.

[AUTO](VC/RC):When placed, COST [Counter Blast (1)], look at two cards from the top of your deck, call up to two cards from among them to (RC) as [Rest], and put the rest into your drop zone.

Unfortunately, these new rear-guards are resting on the field. They do not provide any benefits if Shadow Blaze Dragon is your vanguard. The rear-guards are unable to boost your units or attack your opponent. An opponent can retire those units during his or her next turn. You would not gain anything in this situation.

Play these cards with Shadow Blaze Dragon in the standard format!

Play these cards with Shadow Blaze Dragoon in the premium format!

Overall, Shadow Blaze Dragon from the V Series is a major disappointment. The original card was a more enjoyable vanguard during its prime. His skill is a lackluster ability, and he is not a good card to ride as your vanguard. Shadow Blaze Dragon is only a useful rear-guard in a deck with Gust Blaster Dragon and Phantom Blaster Dragon. He at least provides rear-guards to retire to pay the cost of the skills.