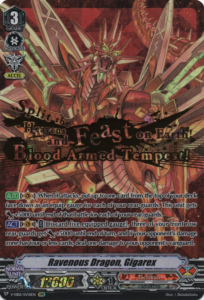 The wrath of the ravenous dragon cannot be appeased before the enemies’ annihilation.

[AUTO](VC):When it attacks, put up to one card from the top of your deck face down as an equip gauge for each of your rear-guards. This unit gets [Power]+5000 until end of that battle for each of your rear-guards.
[ACT](VC):COST [Discard five equipped gauge], three of your front row rear-guards get [Power]+5000 until end of turn, and if your opponent’s damage zone has four or less cards, deal one damage to your opponent’s vanguard.

Tachikaze was ignored in the original Cardfight!! Vanguard. The clan never had a great deck in any meta. Bushiroad is making amends for their mistakes. Ravenous Dragon, Gigarex is the first of many great cards for the new Tachikaze. It comes loaded with the new mechanic, Equip Gauge!

Ravenous Dragon, Megarex is one the best rear-guards to play with Gigarex. Its skills are best used on an Accel circle. Megarex builds its equip gauge every turn. It also benefits from Gigarex giving it an equip gauge. When Megarex on an Accel circle, will have 34,000 power from each skill from both cards.

Overall, I am happy for Tachikaze becoming a pretty good clan. Ravenous Dragon, Gigarex makes Tachikaze a legitimate clan to play. Gigarex is able the generate the power that Accel clans need compete. Its skills enhances every card on the field. It is able to stack a lot of power to itself and rear-guards.