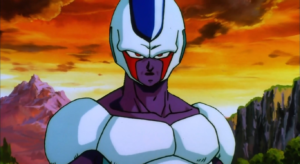 Cooler stands out from most villains with armies or teams in Dragon Ball. He earns respect from his subordinates for working hard instead of forcing respect through fear of death.  Cooler takes action to accomplish his goals, and does not rely solely on his subordinates. Unlike his brother Frieza, Cooler participates in combat with his men. Cooler joins his subordinates in their first battle against Goku, Gohan, and Krillin.

Cooler does not underestimates opponents, respects his subordinates, and will challenge enemies stronger than subordinates. For example, Salza is overpowered by Piccolo, and Cooler stepped in to battle Piccolo. Then, he orders Salza to defeat Gohan and Krillain. Cooler acknowledges Goku’s amazing skills and strength, and quickly tries to destroy Earth after Goku transforms into a Super Saiyan.

Cooler trains regularly to become stronger, and this is suggested when Cooler reveals his fifth form. Cooler achieves this form by training. He says he discovered the next transformation, and characters only gain new transformations through training. He wants to become stronger than his little brother. He succeeds in reaching a new level of power. However, his new power is no match for Goku, and Cooler cannot keep up with the Super Saiyan.

If Cooler is added to Dragon Ball Super, his background would need a few changes. He did not come to Earth to seek revenge after the deaths of King Cold and Frieza. We also know Cooler did not seize control over the Frieza Force. He does not need Frieza’s soldiers. Cooler wants results and mediocre soldiers will not get the job done. Cooler’s Armored Squadron is far superior to the Ginyu Force and Zarbon.

Cooler needs an origin story that can justify his absence. The best option would to keep Cooler’s and Frieza’s toxic relationship, and use it as the reason for Cooler’s absence. Cooler may have left the family to build his own empire instead of staying in Frieza’s shadow. Cutting himself off from Frieza, could be the reason that he will not know about past events. He can learn about the events from past sagas from defectors from Frieza Force, who are seeking better leadership.