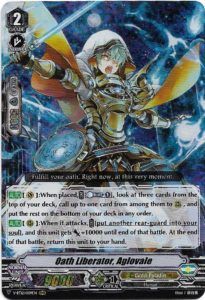 Fulfill your oath. Right now, at this very moment.

[AUTO](VC):When placed, COST [Counter Blast (1)], look at three cards from the the top of your deck, call up one card from among them to (RC), and put the rest on the bottom of your deck in any order.
[AUTO](RC):When it attacks, COST [put another rear-guard into your soul], and this unit gets [Power]+10000 until end of that battle. At the end of that battle, return this unit to your hand.

Oath Liberator, Aglovale is one of the best Gold Paladins from Cardfight!! Vanguard V. He enables the clan’s strategy. Oath Liberator, Aglovale superior calls a card from the deck. In addition, he creates a strong offense to pressure the opponent. This card is a fantastic addition to any Gold Paladin deck in the V-Standard Format and Premium Format!

Oath Liberator, Aglovale is a generic unit with strong abilities. He provides major advantages as a vanguard and rear-guard. You can use his abilities in a variety of decks.

Oath Liberator, Aglovale has an aggressive style as a vanguard. His ability superior calls a card from the top three cards of the deck. You can rush the opponent with many attacks during your second turn.

Furthermore, this ability is a useful tactic for building the soul. You may need cards in the soul to pay the cost of other abilities. You may also need a specific card in the soul such as Black Dragon Knight, Vortimer for Spectral Duke Dragon.

Play these cards with Oath Liberator, Aglovale in the V-Standard Format!

This version of Oath Liberator, Aglovale is a major upgrade from the original card. I recommend playing the version from the V Series. This version has stronger abilities.

Play these cads with Oath Liberator, Aglovale in the premium format!