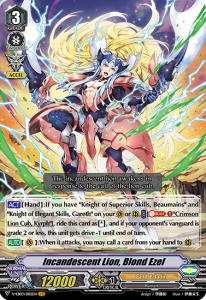 The incandescent lion awakens in response to the call of the lion cub.

[ACT](Hand):If you have “Knight of Superior Skills, Beaumains” and “Knight of Elegant Skills, Gareth” on your (VC) or (RC), COST [Soul Blast (1) “Crimson Lion Cub, Kyrph”], ride this card as [Stand], and if your opponent’s vanguard is grade 2 or less, this unit gets drive -1 until end of turn.
[AUTO](VC):When it attacks, you may call a card from your hand to (RC).

Incandescent Lion, Blond Ezel is the Gold Paladin’s leader. Like many classic cards, he has been rebooted for Cardfight!! Vanguard V. I like the artwork for his VR rarity, but his SVR card’s artwork looks horrible. Kourin Tatsunagi’s face is pasted on his masculine body. The artwork looks odd with a woman’s face on a man’s body. The artist should have given Ezel’s second artwork a feminine body like they did with  Zeroth Dragon of Distant Sea, Megiddo in Divas’ Festa.

Furthermore, you can expand your offense by using Incandescent Lion, Blond Ezel’s second skill. This skill strengthens your early rush in the game. You superior call a card to the Accel Circle. Then, your new unit will gain 10,000 power. You can also add effects from triggers to your new rear-guard.

In addition to superior riding Incandescent Lion, Blond Ezel, he is one of the few cards that can escape Dueling Dragon, ZANBAKU‘s dreaded lock on your vanguard. You may superior ride Ezel to have a standing vanguard. Then, you will not lose the advantages from twin drive and an attack by your vanguard. I would keep an extra copy of Ezel in my hand if I am playing against ZANBAKU. I am always prepared for every cardfight!

Incandescent Lion, Blond Ezel (V Series) is a major upgrade from the original card for the Premium Format. His higher stats and new skills enhance Ezel. In addition to his skills, he is the perfect heart for Absolution Lion King, Mithril Ezel. His name enables Mithril Ezel’s skill, and uses the Accel circle for your new rear-guard. Cards from the original era of vanguard can take advantage of the Accel circle. It is the perfect gift for Gold Paladins as their signature strategy calls allies to the field.