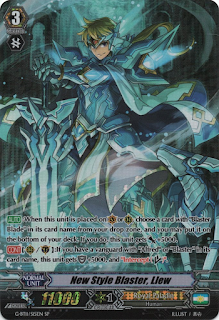 Together with the admired hero, youths charge through the battlefield.

Future Knight Llew has grown into a powerful knight. He is now know as New Style Blaster, Llew, and he continues to fight evil alongside Blaster Blade and King Alfred. I really like his new art. He looks like a powerful knight and should be able to hold his own. Blaster Blade has a worthy ally by his side. His new skills make him a new option for Blaster decks.

New Style Blaster, Llew also has a rare defensive ability. He can intercept attacks with a shield of 5,000 power if you have a vanguard with Alfred or Blaster in its name. He adds one more layer of defense to the deck. The extra shield could make a difference in getting hit or successfully blocking an attack. I do not expect to use this ability often. I can see myself using it in a very close game.

Finally, New Style Blaster, Llew is a Blaster. You are able to use him in many combos with classic units. Wingal Brave is able to use its ability after boosting an attack from Llew. Then, you are able to search for another card with Blaster Blade in its name. Grab the best unit for you in the game’s current setting. I would probably search for the original Blaster Blade to set up my play with Divine Knight King, Alfred Holy Saver.

Overall, New Style Blaster, Llew is one of my favorite versatile units. He is used for offense and defense! His name with Blaster enables him to work with classic units with abilities to support Blasters. His most important ability is returning Blaster Blade from the drop zone to the deck. You may use Blaster Blade Exceed’s ability to search for the card with Blaster Blade in its name to pay for your next Stride. You always want to have at least one guaranteed option to pay the cost.  Join New Style Blaster, Llew to fight alongside Blaster Blade and save planet Cray!