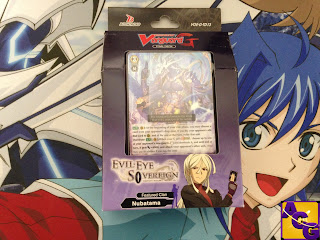 I have been looking forward to playing Nubatama with dominate. Evil Eye Sovereign is one of the most anticipated trial decks in 2017. It has the same impact that Link Joker’s lock had when it was introduced to the game. Players are forced to adjust their strategies to combat the new Nubatama. I was very lucky with my box. I pulled a SP Demon Stealth Dragon, Shiranui Oboro! The trial deck includes 17 new cards and one very important reprint.

Nubatama becomes the first clan to have two keywords! Their first keyword was Afterimage. Evil Eye Sovereign introduces the new keyword Dominate. Dominate allows a player to control an opponent’s rear-guard and use it to attack the opponent’s vanguard. The player may also use the rear-guard’s skills if he or she is able to pay the cost. This is an interesting method of controlling the field and affecting your opponent’s hand’s size. Opponents will be forced to block attacks from their units or take damage in hopes of checking a trigger.

Demon Stealth Dragon, Shiranui Oboro is a very consistent card. He dominates the opponent at the beginning of his turn. Players can superior a rear-guard from their opponent’s drop zone to set up dominate at their beginning of their turns. Then, Shiranui’s Stride skill dominates an opponent’s rear-guard and forces it to attack its vanguard. You may also use the rear-guard’s skills if you are able to pay the cost. This can become an advantage against certain decks. Enma Stealth Dragon, Kingoku Tenbu is a decent G-unit for the trial deck. He dominates a rear-guard at the beginning of the battle phase. The skill is simple to use and is great for beginners. I can see many players replacing him for stronger G-Units for dominate decks. He is not bad for a card from a trial deck.

Stealth Dragon, Genkai is a staple in dominate decks. The archetype does not have many options to draw cards outside the draw phase and battle phase. Genkai helps build your hand. You may draw a card after a dominated unit attacks its vanguard or vanguards. The skill costs a counter blast and soul blast. Do not overuse the skill and miss opportunities to use your other cards.

Every good trial deck has good reprints. Stealth Beast, Katarigitsune is the best reprint in the trial deck. Players can either use his ability to search for Shiranui or discard him to pay the cost to stride a G-Unit. Enablers have been some of the played cards in today’s decks. They are essential to paying for Stride without discarding too many cards for the cost.  Players will save a few dollars. We do not need to buy single copies of Stealth Beast, Katarigitsune. We have a full set in a trial deck!

Evil Eye Sovereign adds another solid trial deck by Bushiroad from this year. Players receive a lot of good cards their dollars. Demon Stealth Dragon, Shiranui Oboro is the best grade 3 to ride vanguard in Dominate decks. Stealth Dragon, Genkai is a centerpiece to build your hand with a lot of cards. You get a very important stride enabler in Stealth Beast, Katarigitsune. I would have liked a few more units with skills connected to dominate.