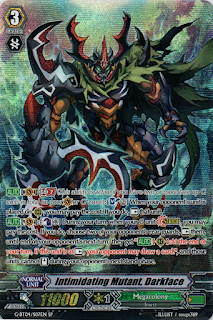 Flourish not, kill not. A good saying.

Intimidating Mutant, Darkface is the strongest warrior in Megacolony. His design is inspired by Hercules beetle. He has the strength of a demigod and the body of an insect. He proudly serves Evil Governor, Darkface Gredora and is one of the six Apostles. He becomes very excited with Gredora and his work for Gyze.

Generation Break two The skill can be used multiple times per turn. Opponents can try to overcome the limitations by calling new units, but Darkface can paralyze those units as well! The skill is very effective against decks such as Aqua Force and Nova Grappler. Those clans cannot afford to retire units and call new units to the field because they lack support to draw extra cards for a good hand.

However, both skills have the same weakness. Particular decks can counter these restrictions by standing units in the main phase and battle phase. Favorite Champ, Victor easily counters Darkface’s strategy by using his skill to stand rear-guards. Furthermore, stand triggers have made a resurgence in the game. Resting units are able to stand after a stand trigger is checked. These units can attack or remaining standing to avoid Darkface’s second skill with the ability to draw cards.

Overall, Intimidating Mutant, Darkface focuses on defense over offense. His skills attempt to limit an opponent’s opportunities on offense. He is either trying to outlast an opponent or delay his defeat. The perfect defense can outlast any opponent, but Darkface has a fatal flaw. Powerful units and stand triggers can stand rear-guards. Darkface will miss out on the opportunity to draw cards from his Generation Break. Paralyze your opponents and crush them with Intimidating Mutant, Darkface’s amazing strength!