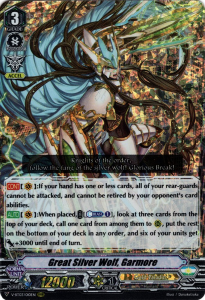 Knights of the order, follow the fang of the silver wolf! Glorious Break!

[CONT](VC):If your hand has one or less cards, all of your rear-guards cannot be attacked, and cannot be retired by your opponent’s card abilities.
[AUTO](VC):When placed, COST [Counter Blast (1)], look at three cards from the top of your deck, call one card from among them to (RC), put the rest on the bottom of your deck in any order, and six of your units get [Power]+3000 until end of turn.

Great Silver Wolf, Garmore is a classic character from the Limit Break era. Aichi from the original series only played him once, despite being a card in his Gold Paladin deck. Great Silver Wolf, Garmore has returned to Cardfight!! Vanguard. He has two new skills, and his second skill is similar to his previous version’s Limit Break. His new artwork is similar to the original card’s art.

Great Silver Wolf, Garmore’s second skill is similar to the original card’s skill. This skill superior calls one of the top three cards of your deck. Then, six your units gain 3,000 power until the end of turn. This skill is great for rushing your opponent. All of your units gain a decent amount of power.

Great Silver Wolf, Garmore is an upgrade from the previous Garmores in the premium format. His abilities can be used in this format. The first ability is a continuous ability, and his second ability activates on riding him. You gain all of his benefits unlike many vanguards from Cardfight!! Vanguard V. In addition, he has an Accel marker to expand the clan’s offense.

Play these cards with Great Silver Wolf, Garmore in the premium format!