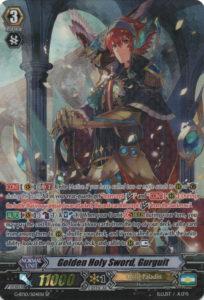 The shining sunlight protects his allies, weaving hope together with them.

[CONT](VC) Generation Break 2 Unite (Active if you have called two or more units to (RC) or (GC) during this turn):All of your rear-guards get “Intercept” and “[CONT](RC):This unit can intercept from the back row during the battle that your vanguard was attacked.”.
[AUTO](VC):[Counter Blast (1) & Soul Blast (1)] During your turn, when your G unit Stride, you may pay the cost. If you do, look at four cards from the top of your deck, call a card to (RC) from among them, shuffle your deck, if you called a unit with the unite ability, look at the top card of your deck, and call it to (RC) as [Rest].

Gold Paladin is one of my favorite clans. Their amazing defense lured me into playing them at every tournament. Their skills have saved me on many occasions. Golden Holy Sword, Gurguit is ready to unite the Gold Paladins in a golden age. He comes with a new defensive skill for the Generation Break and his second skill is an improved version of his original Stride skill.

Golden Holy Sword, Gurguit’s Generation Break is a revised version of his original defensive skill. His Generation Break enables units in the back row to intercept attacks. Perfect Guards can intercept attacks if they are on the field. This is extremely helpful against cards that prevent you from guarding with cards from your hand. Blue Storm Supreme Dragon, Glory Maelstrom’s attack can be negated with ease.

Furthermore, there are moments when I have been forced to superior call a trigger and that is a horrible feeling. These moments occur after using a skill to superior call a unit and my only options are triggers. However, this skill resolves this problem. You will lose some offensive capabilities. However, you are able to create a stronger defense. Your triggers will intercept from the back row. Players need to be able to defend their vanguards against today’s powerful G-Units.

The second skill is available after your G-Unit strides on Gurguit. You look at the top four cards of the deck and superior call one card. Then, you may superior call the top card if you first superior called a unit with unite.  Unite will easily be online after a single skill. Resting a new unit appears to be bad, but your G-Unit has more than enough power to be threat.

Finally, the Gold Paladins are loaded with powerful cards to take advantage of Golden Holy Sword, Gurguit’s Stride skill. Knight of Spring’s Light, Perimore is the best unit to play with Gurguit. He can superior call another unit from the deck. You will gain three units from the Stride ability and Perimore’s skill. Your formation would be nearly complete. Superior calling many units conserves your hand for defense and enables unite.

Overall, Golden Holy Sword, Gurguit perfectly complements his original card and G-Unit counterparts. His defensive ability make it easier for players to defend against high-powered formations. He will frustrate opponents by blocking with every card on the field. I am more impressed with his Stride ability. It basically enables unite on every turn if you are playing a deck with mostly or only units with unite. I am ready to fight with Golden Holy Sword, Gurguit!