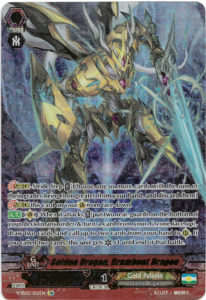 We know not how to give up.

[Stride]-Stride Step-COST [Choose one or more cards with the sum of their grades being 3 or greater from your hand, and discard them], Stride this card on your (VC) from face down.
[AUTO](VC):When it attacks, COST [put two rear-guards on the bottom of your deck in any order & turn a card from your G zone face up], draw two cards, and call up to two cards from your hand to (RC). If you called two cards, this unit gets [Critical]+1 until end of that battle.

Golden Dragon, Brambent Dragon is dragon with impressive strength and ability. He is a generic card that you may play in any Gold Paladin deck. Golden Holy Sword, Gurguit only has a single ability. This is a strong ability with offensive firepower.

Play these grade 3 cards with Golden Dragon, Brambent Dragon in the premium format!

Play these cards with Golden Dragon, Brambent Dragon in the premium format!