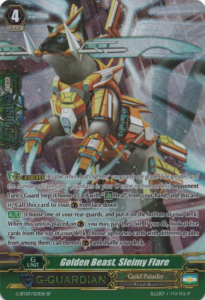 Even cats, make a serious effort some of the time.

[G guardian] (Usable when both fighters’ vanguards are grade 3 or greater, and the number of face up G guardians in your G zone if three or less)-Opponent Turn’s Guard Step-[Choose a card with “Heal” from your hand, and discard it] Call this card to your (GC) from face down.
[AUTO]:[Choose one of your rear-guards, and put it on the bottom of your deck] When this unit is placed on (GC), you may pay the cost. If you do, look at five cards from the top of your deck, choose up to two cards with different grades from among them, call them to (GC), and shuffle your deck.

G-Guardians have changed the landscape in Cardfight!! Vanguard. Everyone is playing four G-Guardians in their decks. I never thought I would make an article for Unit of The Week for a defensive card. I was lucky to pull Golden Beast, Sleimy Flare. He is the second G-Guardian for Gold Paladins. He has made a huge impact in my Gold Paladin deck. His defensive skill has saved me in several games.

Golden Beast, Sleimy Flare is a great G-Guardian. He superior calls two additional units with different grades from the top five cards of your deck. Your shield from your three cards can be as high as 30,000 shield. Your heal trigger with 10,000 shield basically becomes a 30,000 shield. The shield tripled by discarding a single card and returning one unit to the deck. You are not losing a unit because Gold Paladins are constantly superior calling units the field. It is not truly as lost because the unit will be replaced on your next turn.

Additionally, Golden Beast, Sleimy Flare and Sunrise Ray Knight, Gurguit can unite the Gold Paladins in an unbreakable defensive wall. Gurguit’s Generation Break can superior call an unit from the top four cards of your deck to the guardian circle. That is a total of three units from the deck in combination of Golden Beast, Sleimy Flare’s and Sunrise Ray Knight, Gurguit’s skills. You also have two opportunities to search for a perfect guard to block the opposition’s attack!

However, there are a few clans with skills to prevent Golden Beast, Sleimy Flare from using his ability. These clans will retire your rear-guards. They are the fuel for Golden Beast, Sleimy Flare’s skill. Interdimensional Dragon, Chronoscommand Revolution can return all of your rear-guards to the bottom of your deck. Kagero and Narukami specialize in retiring units. Link Joker will lock your units. Locked units are trapped in their state until they are unlocked.