I participated in my second local tournament last Saturday. Six players participated and everyone played with a different clan. Participants played Gear Chronicle, Genesis, Gurguit, Liberators with Limit Break, and Dragonic Overlord The Legend. I wanted to film games from every round, but my camera’s battery died during my second match. Unfortunately, I was only able to film the round one’s first game. I had a great time at the tournament.

I played my Gold Paladin deck. Gold Paladins are my favorite deck at the moment. Gurguit’s deck is one of the strongest decks on offense and defense. This is the only deck with the ability of bypassing attacks with limitations on guards. I can superior call perfect guards from my deck. The deck’s ultimate card is Sunrise Ray Radiant Sword, Gurguit. My opponents struggled defending his attacks when they did not have a perfect guard.

My first match was against Cosmic Regalia, CEO Yggdrasil. I won the match two games to zero. Gurguit’s Generation Break and my Generation Guards blocked almost every attack from Yggdrasil. I was not going to risk losing by multiple critical triggers. Sunrise Ray Radiant Sword, Gurguit aced the first game for me. My opponent did not have enough shields to block his attack. I checked two critical triggers to win the game.

The second game was an easy victory for me. My opponent made a critical error when he Legion. One Legion Mate was in the damage. He rode on top of one Legion Mate. A Legion Mate was in his hand and his fourth Legion Mate was in the drop zone. He had one copy to target for Legion, but he recycled 4 different cards. He forgot to return his only available Legion Mate to the deck for Legion. He was only able to Stride for a few turns before be riding a new copy of Yggdrasil to perform Legion. His efforts were too little too late. My defenses held him in check for the entire match. My Gold Paladins claimed victory in a clean sweep! 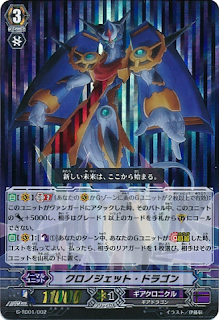 Round two was the longest match of my life. The first game lasted for nearly 40 minutes. We were going back and forth in an epic card fight. I eventually lost the first game after I ran out of resources to defend my vanguard. Interdimensional Dragon, Chronoscommand Revolution gave my opponent the edge in our game. He cleared my board of all rear-guards, and my Generation Guardians were not able to use their skills to their fullest potential. I was recording the game, but my phone died near the first game’s conclusion. The second game lasted for 20 minutes and I lost this game 5 to 6 as well. 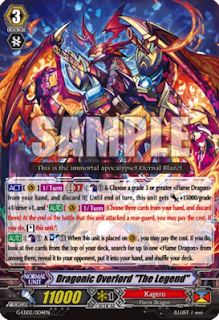 My final match also had two very close games. I lost the first game 5 to 6. My friend and host of the tournament played his upgraded Dragonic Overlord deck with Dragonic Overlord The End and Dragonic Overlord The Legend. His defense gave him in the edge. Sunrise Ray Radiant Sword, Gurguit was not able to crack through my opponent’s perfect defense. I lost the second game because my deck was empty. I superior call units a lot during my games. We were evenly matched until the last turn. My deck ran out of cards after a long match.

The Gear Chronicle deck topped the tournament. It was played by the same guy with the Dragonic Overlord The Legend deck from the first tournament. I finished the tournament with a 1-2 record. I am disappointed in losing the final two matches. Each game could have gone in my favor. Cardfight!! Vanguard is a game of skill and luck. Luck was not on my side in the last two rounds.

I am in the process of making changing to my Gold Paladin deck. There are a few retro cards that to be replaced with better cards for the deck’s strategy. I need to buy a complete set of Salvation Lion, Grand Ezel Scissors to be my backup vanguard. I had defensive problems when I had the ride the original Ezel and Garmore. A deck profile will be released by the end of the summer. Stand up my Gold Paladins!