Gold Paladins have always been the wild card clan. They tend rely on luck more than any other clan to win games. Gold Paladins randomly called units to the field in hopes of receiving a strong unit, but sometimes fell short of their goal. The clan has evolved over the years and has become more efficient. The Gold Paladins are my favorite clan at the moment. I tend to play Paladin decks such as King of Knights Alfred, Blaster Dark Diablo, and Sunrise Ray Knight Gurguit. My Gold Paladin deck has made a major impact at my locals.

Unite is the Gold Paladins’ new ability. The ability is based on Gold Paladin’s theme of superior calling allies. Unite activates after you call two rear-guards to the field. Various units gain different abilities when Unite is active. Most units gain power from the skill. Other cards gain the ability to superior call allies to the field.  Sunrise Ray Radiant Sword, Gurguit and Golden Dragon, Ray Breath Dragon are the best G-Units with Unite. They give your formation an offensive boost when Unite is online!

Every great deck needs a strong defense. Defense has greatly improved after G-Guardians were released in the game. Gold Paladins have one of the best defenses in Cardfight!! Vanguard. Sunrise Ray Knight Gurguit and Golden Beast, Sleimy Flare have the ability to superior call perfect guards from the deck. Their skills bypass cards with similar as Blue Storm Supreme Dragon, Glory Maelstrom. You can also save cards to guard your vanguard later in the game. 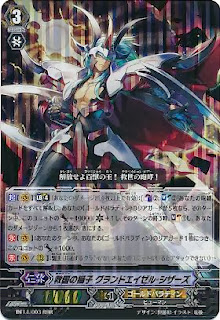 The Gold Paladins is one of two clans with the ability to unlock every card on the field. Link Joker does not match up well against the Gold Paladins. Their efforts to lock unites are fruitless. Salvation Lion, Grand Ezel Scissors and Liberator, Monarch Sanctuary Alfred have Limit Breaks to break the spell. Salvation Lion, Grand Ezel Scissors is the second best grade 3 vanguard for Gold Paladins. He is a great card to counter Star-Vaders. He has an 11K base to keep your defense on par. Ezel’s skills give more offense to your formation than Gurguit. You have a much better offense without Stride under Ezel than Gurguit.

Gold Paladins have many G-Units to choose from. Most of them work in harmony with Sunrise Ray Knight Gurguit. Only few Gold Paladin G-Units can only activate skills with its archetype. Sunrise Ray Radiant Sword, Gurguit is arguably the best G-Unit in the game. His Generation Break requires Unite. His skill gives an enormous 50,000 power to a full field. This is one of the most intense skills in Cardfight!! Vanguard. It pressures your opponent to his or her limits.