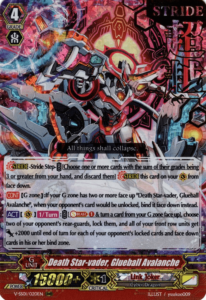 All things shall collapse.

[Stride]-Stride Step-COST [Choose one or more cards with the sum of their grades being 3 or greater from your hand, and discard them], Stride this card on your (VC) from face down.
[CONT](G zone):If your G zone has two or more face up “Death Star-vader, Glueball Avalanche”, when your opponent’s card would be unlocked, bind it face down instead.
[ACT](VC)1/Turn:COST [Soul Blast (1) & turn a card from your G zone face up], choose two of your opponent’s rear-guards, lock them, and all of your front row units get [Power]+2000 until end of turn for each of your opponent’s locked cards and face down cards in his or her bind zone.

Furthermore, the best targets to lock are grade 2 units. The opponent loses offense and defense. They cannot attack you while they are face down. Your opponent loses them for intercepting attacks after Death Star-vader, Glueball Avalanche binds them.

Furthermore, you have the potential to gain a lot of power from this ability. Your front row units can gain 10,000 power if you lock five of the opponent’s rear-guards. This strategy relies on other units with the ability to lock cards. I recommend playing  Bisection Star-vader, Zirconium and Disorder Star-vader, Iron. These units have the ability to lock additional rear-guards.