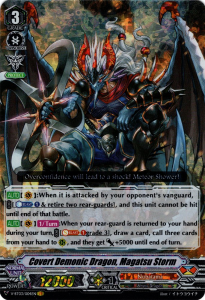 Overconfidence will lead to a shock! Meteor Shower!

[AUTO](VC):When it is attacked by your opponent’s vanguard, COST [Counter Blast (1) & retire two rear-guards], and this unit cannot be hit until end of that battle.
[AUTO](VC)1/Turn:When your rear-guard is returned to your hand during your turn, COST [Soul Blast (1) grade 3], draw a card, call three cards from your hand to (RC), and they get [Power]+5000 until end of turn.

Covert Demonic Dragon, Magatsu Storm joins Cardfight Vanguard’s standard format. The new Covert Demonic Dragon, Magatsu Storm has two new and improved skills. He is a master of defensive tactics, and uses special arts in battle. This new version has a much better design than the original card. He has more interactions with his fellow Nubatama units.

Covert Demonic Dragon, Magatsu Storm’s first skill acts as a Perfect Guard for emergencies. The skill negates an attack from your opponent’s vanguard. This is very useful when you do not have a Perfect Guard or Protect marker. Furthermore, this skill is ideal for both formats. It is the perfect counter against cards like Dragonic Waterfall.

Covert Demonic Dragon, Magatsu Storm’s second skill superior calls three units from your hand, and they gain 5,000 power until the end of the turn. A deck with this card is built around this skill. This skill is great for multiple attacks every turn. You can overwhelm your opponent with strong attacks. In addition, triggers from your drive check further increase your rear-guards’ power.

Furthermore, this skill has synergy with Protect II. Together they set up a good offense with a lot of power. You can call a rear-guard to a circle with a Protect II marker. Your new rear-guard will gain 10,000 power. Also, triggers from your drive check can further raise your rear-guard’s power.

Overall, Covert Demonic Dragon, Magatsu Storm is a respectable vanguard. His offensive skill is fantastic for generating many attacks every turn. It can overwhelm your opponent. Also, his defensive skill can bail you out of a tight situation to avoid defeat. The skill perfectly fits in a Protect clan.