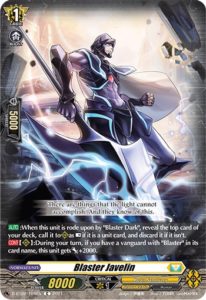 There are things that the light cannot accomplish. And they know of this.

[AUTO]:When this unit is rode upon by “Blaster Dark”, reveal the top card of your deck, call it to (RC) as [Rest] if it is a unit card, and discard it if it isn’t.
[CONT](RC):During your turn, if you have a vanguard with “Blaster” in its card name, this unit gets [Power]+2000.

Blaster Javelin superior calls the top card at rest of your deck when you ride Blaster Dark on top of him. It is a great ability to gain a resource. The extra rear-guard can provide offense on your next turn, and you may use it to fuel the cost of Phantom Blaster Dragon.

Furthermore, a free rear-guard is a great resource. Blaster Javelin does not require a cost for this ability. You may use your counter blasts and soul blasts for other cards in your deck.

Blaster Javelin gains 2,000 power during your turn when you have a Blaster for your vanguard. The additional power is helps your units to reach high numbers in battle. Blaster Javelin becomes a booster with 10,000 power.

Play these cards with Blaster Javelin (D Series) in the D-Standard Format.

Play these cards with Blaster Javelin (D Series) in the Premium Format!