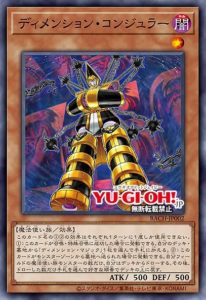 If this card is Normal or Special Summoned: You can add 1 “Magical Dimension” from your Deck or GY to your hand. If this card is sent from the Monster Zone to the GY: You can draw cards equal to the number of Spellcaster monsters you control, then place the same number of cards from your hand on top of the Deck in any order. You can only use each effect of “Dimension Conjurer” once per turn.

Furthermore, Dimension Conjurer adds consistency and value to Magical Dimension. The spell card is a useful card in decks with spellcasters. You can quickly special summon a powerful spellcaster and destroy one of the opponent’s monsters.

The second effect perfectly complements the first effect. You may draw cards equal to the number of spellcasters on your field when Dimension Conjurer is sent from the Monster Zone to the graveyard. Then, you place the same number of cards from your hand on top of the deck.

This effect provides a number of advantages. You can fix a bad hand. You keep the cards that you need, and you return the other cards on top of the deck in a good order. This strategy provides consistency for the deck.

Furthermore, the second effect requires the perfect setup. You need one or two additional spellcasters on the field with Dimension Conjurer for this effect. You will draw at least one card to manipulate your deck.

Play these cards with Dimension Conjurer!

Second, the best benefit is the second effect. Dark Magician’s decks may suffer from inconsistency. You can fix a bad hand and set the deck’s top cards for upcoming turns. You keep the cards that will help you in the current stage of the game.

Dimension Conjurer provides an additional method to special summon Endymion, the Master Magician. This monster is a good backup. An opponent may destroy Magical Citadel of Endymion before you have six Spell Counters.

Play these archetypes of Dimension Conjurer!