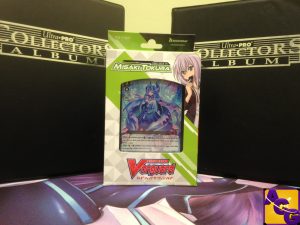 Magus returns for the standard format of Cardfight!! Vanguard V. These rebooted Magus units are new staples in many Oracle Think Tank decks. Hexagonal Magus is a strong vanguard, and Rectangle Magus is one of my favorite rear-guards in the trial deck. Both cards manipulate the deck to stack triggers on top of it. Then, you can gain advantages from your trigger’s effects!

Furthermore, Weal Crane is the best common card in the deck. Weal Crane goes into the soul and gives 10,000 power to two units when you draw a card. The skill is very consistent. I recommend playing it in Oracle Think Tank decks. Its skill fits every deck in the clan.

Unfortunately, not every common card is useful. Miko of Spiritual Light, Kinuka is the worst card in V Trial Deck 05 – Misaki Tokura. I do not see any competitive decks playing this card. I also doubt many budget decks will consider it. There are better cards such as Battle Sister, Orangette.

V Trial Deck 05 – Misaki Tokura‘s strategy is to outlast the opponent by creating a strong defense and stacking triggers on top of the deck. Hexagonal Magus runs the show. Ride her as often as possible to consistently stack triggers on your deck. You can stack triggers to gain power, draw cards, and heal damage. In addition, the triggers add pressure on your opponent.

Overall, V Trial Deck 05 – Misaki Tokura is one of the best trial decks for Cardfight!! Vanguard. The new Magus cards are great staples in Oracle Think Tank decks. They lay a foundation that players can build decks upon. V Trial Deck 05 – Misaki Tokura also includes useful common cards. You can use this trial deck to upgrade your Oracle Think Tank decks for the premium format and standard format!