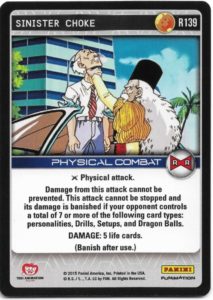 Physical attack.
Damage from this attack cannot be prevented. This attack cannot be stopped and its damage is banished if your opponent controls a total of 7 or more of the following card types: personalities, Drills, Setups, and Dragon Balls.
DAMAGE: 5 life cards.
(Banish after use.)

A fierce display of offense can give you the upper hand in Dragon Ball Z TCG. Sinister Choke is a Physical Combat that fits the description of a strong and destructive attack. The card’s image is Android 20 from his first appearance. Him and Android 19 were destroying the city on Amenbo Island . Android 20 nearly killed Yamcha by thrusting his hand through Yamcha!

Sinister Choke is a physical attack that deals five life cards of damage! Your Main Personality’s power level does not matter. The weakest Personalities can deal damage with Sinister Choke!

Furthermore, your opponent is defenseless against this physical attack. Sinister Choke cannot be stopped. You will always hit the opponent’s Main Personality and deal damage! In addition, you will activate a critical damage effect to gain an additional advantage!

In addition, Sinister Choke banishes the damage if your opponent has seven or more cards of the following types: Personalities, Drills, Setups, and Dragon Balls. This is a destructive ability against many decks. The opponent loses many important cards for his or her strategy. This physical attack chokes the life out of an opponent’s deck. You can avoid his or her strongest cards.

Sinister Choke is an amazing card to counter Namekian decks. Namekian decks commonly control many Dragon Balls and Drills. You are very likely to to trigger the additional effect, and banish damage from the attack.

Play these cards with Sinister Choke!

Overall, Sinister Choke is a strong Physical Combat card. Any deck can includes this card. Sinister Choke effectively counters many decks. You always deal damage, and you have the chance to banish the damage to gain more advantage.