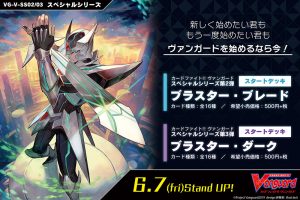 Finally, Start Decks are cost effective products for players. Players have easier access to the rarest cards. New players to the game will have some of the best cards in the standard format. I need King of Knights, Alfred and Phantom Blaster Dragons for my decks. These Start Decks are on top of my list of things to buy.

Start Deck Blaster Blade and Start Deck Blaster Dark will be released on June 7th, 2019. A release date for the English Edition has not been confirmed. I will update this article after Bushiroad gives an official date for English players. I am going to order both decks. This is a great time to be a vanguard player.