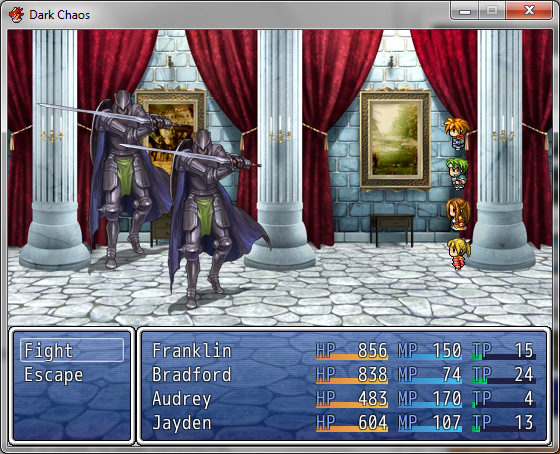 I’m a huge fan of RPG games. Their playstyle with turned-based battles and hours of fighting in amazing battles are what excite me about RPG games. My very first RPG game was Final Fantasy Mystic Quest for the SNES. I remember spending hours fighting  Final Fantasy VI, Super Mario Legend of the Seven Stars, and MegaMan X Command Mission are my three favorite RPG games. One day in college I decided to research how I can make video games with simple programs. In 2011 I started developing my very own RPG game with the RPG Maker XP. The game’s original name was Legend of the Dark Star. Soon afterwards XP’s successor RPG Maker VX was released and I quickly jumped on the bandwagon Unfortunately, XP’s game files were not compatible with VX’s system so I had to start from stretch. However, once again I jumped the fence when RPG Maker VX ACE was released because it had additional features to make my game stand out from the competition. I renamed the game to Dark Chaos and continued development until October in 2013. I intended to take a short break, but it ended up lasting over a year. 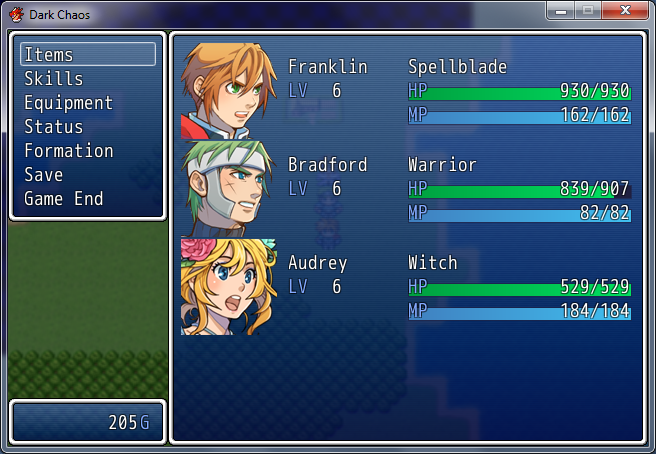 Dark Chaos is a retro style RPG game based on games from the NES and SNES eras. Most of my favorite RPG games were made during this era. The story is about a young group of heroes that put the world on their shoulders. They must stop the Dark Army from using an ancient power to rule the world. The characters are puns of my family, friends, and favorite sports stars.

My mind is now fresh with new ideas for the game’s development. Taking a look back at the game’s original demo, I want to make some slight changes to better tell the story. The game’s current artwork needs a tuned up with original graphics and music. The game only contains graphics from the RTP. I am planning to hire an artist to draw a title and original characters. I like the RTP’s music, but I also want original themes to take the game to the next level.

Don’t worry everyone, I’m still covering Cardfight!! Vanguard, Dragon Ball Z, and Yu-Gi-Oh! Dark Chaos is just a new addition to my blog. Although it’s not a card game, I hope you will enjoy my game and watch its development. I will post new updates every so often when I have plenty of new content to showoff. A new demo will be released in 2015! Click here to check out the game’s page.