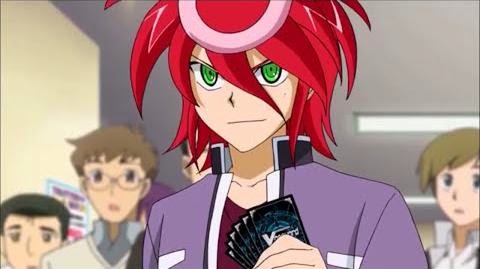 Cardfight!! Vanguard G has hit television screens across Japan and many computer screens around the world. The series features a new cast of main characters along with favorites such as Kamui. Fans have quickly shared their thoughts on the new series after each episode and so far many fans have expressed great concerns for the series future as they are not impressed with the new series so far. I must say I am in agreement with many disappointed fans.

A Boring Cast of Characters

Currently there is not a single character that I can honestly say I like in the show thus far. Chrono is a very stereotypical lone-wolf type character, who is always bored of nearly everything except for vanguard. Shion is the boring rich kid, who can never wrong in everyone’s eyes especially women. The story between the characters is very annoying to watch as Shion is the attractive guy who is always innocent, and Chrono is falsely accused of being a troublemaker. Chrono’s conflicts with others are solely based on prejudices that are very stupid to say the least. If Chrono has a troubled past, then the views on him would be understandable to a degree. However, there are not any suggestions leading me to believe Chrono has a history of trouble.

Kamui has been my biggest disappointment so far in the new series. He still has a fiery passion to play vanguard with his Nova Grapplers. Yet I don’t see his cockiness that made him standout from his teammates and rivals. In the original Cardfight Vanguard series, Kamui went from being an immature teammate that quit Team Q4 to a reliable teammate that his friends can count on in big games. He would have been the perfect character to be the leading protagonist to lead the new characters on a potentially new team.

Finally, I thought this was a show about a character’s problems and trading card games. Now we only have characters with problem minus trading card games so this show has become a Soap Opera. If I wanted to watch a soap opera, then I would turn back time to watch The Young and the Restless with my grandmother (bless her soul).

It is an understatement to say cardfights in Cardfight!! Vanguard G have been lackluster. The fights do not provide any content to the story. They are rushed with high quality animations to impress the viewer, but fall flat for not explaining, what is happening during a match. Skills are no longer explain as players play cards and attack each other. On the other hand, the original Cardfight!! Vanguard anime series was able to balance storytelling and fights by combining them into cardfights. We see both characters making fantastic plays as they speak to each other about their current conflict. Most importantly it was a great way to learn how to play the game. Sure the characters would occasionally make a misplay, they also showed us fantastic combos with a variety of cards.

Failing to Showcase the Mysterious Clan

Gear Chronicle is the newest clan in the game. Characters often refer to it as a very mysterious clan because they never heard about it until Chrono played it. However, cardfights’ lack of actual content does not showcase the clan’s abilities. How can a clan be mysterious when its skills are not being displayed? Chrono has not been shown to activate a single skill in any of his match so far in the first six episodes. Characters have not been surprised to see the clan’s interesting mechanic to return opposing rear-guards to the deck.

Bushiroad built a lot of hype for Gear Chronicle as the new top clan in the series, it is the main protagonist’s clan. However, they have failed to backup the hype. Aqua Force’s and Link Joker’s introductions made an impact to the overall story as both clans abilities were shown in their debuts. Their abilities led to them winning their first matches to show their dominance. The same should have been done with Gear Chronicle instead of a fight without substance.

Cardfight!! Vanguard G has started in the wrong direction, and is on course of being the worst season in the series to date. There are not any positives in any areas of the show. The characters, cardfights, and story lack a lot of substance to take vanguard to the next level. Every new series should improve upon the previous series, but so far Cardfight!! Vanguard G has greatly regressed the series. Bushiroad had a very good formula for the original series, and should have stuck to it for the new series. If Cardfight!! Vanguard G continues to put viewers to sleep, then it will be the biggest bust since Kwame Brown!