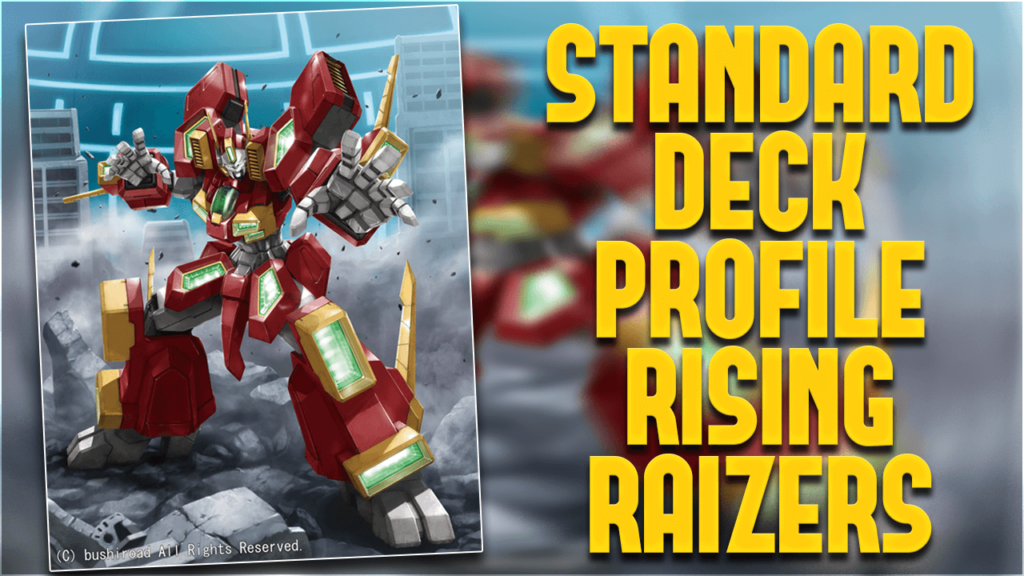 Raizers is the first archetype from Nova Grappler. It was introduced in Descent of the King of Knights in 2011. This makes the archetype one of the oldest archetypes in the game’s history. Bushiroad has retrained these legendary cards for the V-Premium format. Nova Grappler had a rough start last year, but the new support from Light of Salvation, Logic of Destruction enhances the deck.

Furthermore, Raizers are known for their ability to stand during combat. They quickly rush their opponents, but they are very vulnerable because of their lack of defense. The deck completely focuses on offense, and defense is a second though. You could say this is the type of deck Mike D’antoni would love to play if he played Cardfight!! Vanguard. I have tested this deck at my local shop, and had a fun experience with my Rising Raizers.

Incise Raizer has a lot of potential and becomes a strong vanguard in the late game. This purple robot stands all rear-guards on additional rear-guard circles! This card becomes more powerful when I have two or more Accel circles on the field. The most realistic scenario is having three Accel circles and standing three rear-guards for additional attacks. I would have seven attacks in total from those four units. 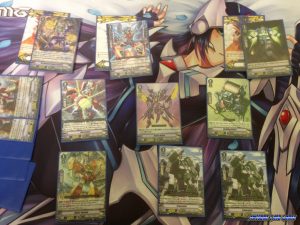 The majority of rear-guards in the deck have the ability to stand during combat or stand another rear-guard on the field. A card such as Burstraizer is the perfect card to call on a normal rear-guard circle. He stands when I declare an attack with my vanguard. Then, my vanguard’s ability stands the rear-guards on the Accel circles. I am maximizing the amount of attacks in combat.

Furthermore, Raizer Custom is the ideal rear-guard to have in my back row. He has a strong synergy with my vanguards and Burstraizer. He stands when a unit in the same column stands in combat. If a skill is free, then it is my type of skill! I will always have his power to add to my rear-guard in the front row.

Finally, most of my cards in the deck rely on counter blasts. I am playing two copies of Boomerang Thrower to counter charge cards in the damage zone and soul charge cards. His simple skills help maintain the deck’s consistency. He is useful when I am playing a long game, and his first skill gives me access to my vanguard’s skills. In additional, his second skill fuels the soul for Burstraizer’s skill.

Accel 1 is a better option than Accel 2 for this deck. I am rushing to defeat my opponent, and Accel 2 may not be able to provide a good amount of power for my rear-guards. If my opponent checks a trigger during my turn, then he or she can easily block attacks from a rear-guard on an Accel 2 circle. The additional 10,000 power from an Accel 1 circle is critical to my deck’s success. My rear-guards are constantly pressuring my opponent with an onslaught.

Rising Raizers sacrifices defense for a lot of offense. I am extending my hand onto the field. I need a lot of rear-guards to generate my high-powered offense. However, this strategy weakens my defenses. I will be taking damage very often in games. Eventually, my wall of defense will collapse, and I will lose games under this circumstance.

In addition, clans with skills that remove units have a major advantage over Rising Raizers. This deck relies on its rear-guards for most of the offense. Kagero and Narukami are my Raizers’ kryptonite. If an opponent with a Kagero burns my rear-guards, then I will be in a lot of trouble. I will be forced to overextend my resources to replace my offense.

Rising Raizers is a very aggressive and fast deck. It hits hard and often (Yes, I’m using the slogan of DBZ CCG). I really enjoy playing this deck at my local store. The deck is very consistent and maintains a steady flow of offense. My Raizers are furious and launch a powerful assault my opponent. I want to attack my opponent as many times as possible. Incise Raizer and Perfect Raizer are the perfect vanguards for this strategy. They enable my rear-guards to overwhelm my opponent with a fury of attacks.