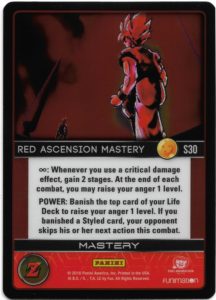 Red-style in Dragon Ball Z TCG (CCG) is an aggressive deck. The style’s strategy is raising anger to reach new levels and unleashing powerful attacks. Red Ascension Mastery is the perfect mastery for this type of deck. The mastery has two impressive Powers. The card increases your levels and gains power stages. In addition, it may also force the opponent to skip his or her next action in combat!

Red Ascension Mastery raises your anger one level at the end of each combat, and you gain 2 stages when you use a critical damage effect. The additional gain of 2 stages of power enables you to play multiple energy attacks in combat and swing strong physical attacks.

Furthermore, this is a continuous Power. You may activate it as many times as possible during combat. I recommend playing cards that deal a critical damage effect. You will be able to consistently play Red Ascension Mastery’s continuous Power.

Red Ascension Mastery also banishes the top card of your Life Deck to raise your anger 1 level. In addition, your opponent skips his or her next action in this combat if you banished a Styled card. This is an aggressive Power with a nice reward. You can perform a consecutive action after you use this Power.

For example, your Main Personality may gain a level after increasing its anger and deal damage from an attack.. You may follow this action with an energy attack or physical attack. You may gain a major advantage from this aggressive strategy.

Red Ascension Mastery enables an easy path to MPPV. It consistently raises your anger and your Main Personality will quickly reach the next level. You can expect to advance levels throughout a game.

Furthermore, Red-style has many cards with the Power to raise anger. Your Main Personality may raise its level at the end of each combat. Protect your anger from the opponent to achieve victory.

Red Ascension Mastery also presents the option for survival victory. You can be very aggressive. It raises your stages, and you have more opportunities for energy attacks. The Power to force the opponent to his or her step in combat gives you a consecutive action to pressure the opponent.

Overall, Red Ascension Mastery is a strong and aggressive Mastery. You can create strong decks with Goku and Trunks. They have fantastic cards with synergy with Red Ascension Mastery. It quickly raises your Main Personality’s level. You have the opportunity to unleash two consecutive actions with its second Power.