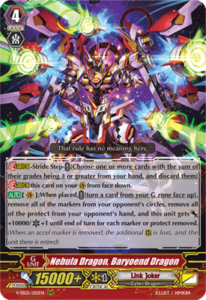 That law has no meaning here.

[Stride]-Stride Step-COST [Choose one or more cards with the sum of their grades being 3 or greater from your hand, and discard them], Stride this card on your (VC) from face down.
[AUTO](VC):When placed, COST [turn a card from your G zone face up], remove all of the markers on your opponent’s circles, all of the protects from your opponent’s hand, and this unit gets [Power]+10000/[Critical]+1 until end of turn for each removed marker and protect. (If there is no an accel marker, the additional (RC) disappears, and the units there are also retired)

Overall, Nebula Dragon, Baryoend Dragon perfectly represents Link Joker for his ability to interfere with the game’s normal rules. It is a useful card to add to a G-Zone. He counters an opponent’s strategy. His ability prevents a player from using a Protect marker. His ability also has the potential to retire many rear-guards on Accel markers.