Aqua Force has become one of my favorite clans to play in recent months since the release of  Blue Cavalry of the Divine Marine Spirits. Decks that focus on combo plays are my favorite decks to play. It gives me a variety of options to create mind blowing plays to win games. I used the cards from the trial deck and purchased more singles to make a full deck with an Extra Deck. I planned to complete the deck last month, but my deck took longer to complete than expected because of unforeseen circumstances. Keep in mind this is a casual deck to play for fun. It is not built to be the most competitive to win a tournament.

Stride is the newest mechanic that every deck is playing for its advantage and my deck is no different.  My extra deck is completely full with 8 cards. Tidal Bore Dragon is very useful early in games. Its potential to give me extra draw power is critical to my deck’s success. The extra draw makes up for Aqua Force’s undeniable demand to have full field to utilize skills.

Marine General of Heavenly Silk, Sokrates won’t be appearing in many deck profiles. He is not nearly as tactical as Tidal Bore Dragon, but he does attack at higher numbers. His skill pumps him up to 31K and he becomes a 39K attacker with a boost from Polo. 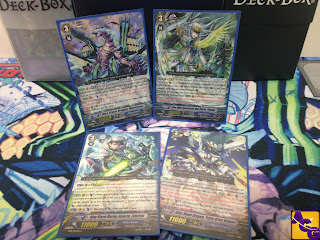 My vanguard lineup is very diverse with four different vanguards. Each one is from a different era in Aqua Force’s history. They all fit well together in the deck. My only minor adjustment is the attack order for each turn to correctly use their skills. Blue Storm Dragon, Maelstrom, and Blue Wave Dragon, Tetra Drive Dragon represent the Limit Break. Tetra-drive Dragon and Thavas are the best finishers in the deck. Thavas limits my opponent’s defensive capabilities, but is still stoppable with Sentinels. Tetra-drive Dragon is a fantastic card to play as a finisher. He can attack twice per turn when I have a proper field to set up his skill. There is not much I can say about Maelstrom. Maelstrom is the deck just for fun.

Blue Storm Marine General, Zaharias is a unique Legion. He has the potential to create amazing plays to win games. His persona drive check stands up two rear-guards and give them 5K power. Standing up both front row rear-guards gives me two more attacks. If my opponent’s hand is low on cards, then I could op into giving all of the effects to a single column for a very strong attack. Being able to pull a double persona drive check is a game breaking play. Both rear-guard columns will be standing with a total of 20K power divided among the four units.

Blue Storm Marine General, Lanis is the wildcard. His skill pressures my opponent into guarding his attack to prevent me from getting a free draw. Drawing cards helps me building my hand to defend and call extra units if any units are retired. Finally, Battle Siren, Rohde is in the deck for extra offense. Rohde can stand back up in a combo with Officer Cadet Andrey’s skill.

My grade one units are mostly your basic and generic cards. Of course I am running four Perfect Guards. The only technical card in this lineup is Assassinate Sailor. Her ability to retire a rear-guard can become handy when pushing to a swift win. Retiring an interceptor takes away one more card for my opponent to defend with.

Officer Cadet Andrey’s Generation Break helps set up plays when I do not have Tidal Assault or Magnum Assault on the field. It gives one of my rear-guards nearly the exact skill that Magnum Assault has. I have the extra attack that I need for my vanguards’ strongest skills.

My deck is ready to rumble! Aqua Force has a lot of options to make decks. The clan has so many cards that share chemistry within and outside their archetypes. My deck is no exception. I choose a casual deck because that’s the type of player that I am. If I win, then that is great, but if I lose, then that if cool too. I am here to have and make some awesome combo plays with Aqua Force. Be sure to check out The Legendary Aqua Force in action on my YouTube channel!