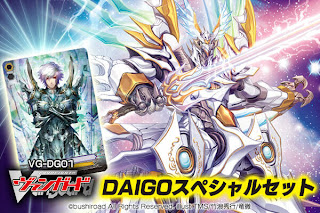 The legendary warrior Daigo has returned! Daigo’s new deck will be an upcoming special trail deck! The trail deck will premiere in season 3’s episode 15. The deck will come with 7 new cards, 10 reprints 1 RRR card, 2 RR cards, and 2 promo cards! By the looks of it the deck will mostly likely be a Royal Paladin deck.

It’s release date in Japan is June 1st 2013! Hopefully it will be release in the states by November or December! Who’s excited for Daigo’s special deck!?