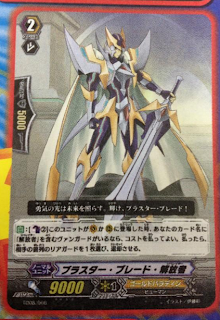 The long wait is over! A translation for Blaster Blade Liberator’s ability has been found.

[CB2] When this card enters the V or R circle and you have a “Liberator” Vanguard, you may pay the cost. If you do, retire one of your opponent’s rearguards in the front row.