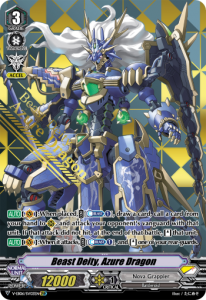 Go through them consecutively! Take it, Sacred Serial Buster!

Finally, Beast Deity has more cards available in the premium format. This card improves the deck in that format. It is one of the few grade 3 vanguards from Cardfight!! Vanguard V that can use its skill. Furthermore, it has a lot of synergy with Ultimate Beast Deity, Ethics Buster Catastrophe. An Accel circle and Ethics Buster Catastrophe’s skills are an amazing combination! You generate a lot of strong attacks to crush the competition!

Play these cards in the premium format with Beast Deity, Azure Dragon!

Overall, Beast Deity, Azure Dragon is one of the best vanguards in Nova Grappler. He is a very consistent card, and the clan needed this type of card. You can play it in any Nova Grappler deck. You will want to build a Beast Deity deck when the archetype has more cards in the standard format. His second skill is always useful, and gives you an extra attack for the turn. Stand up your rear-guards with Beast Deity, Azure Dragon!