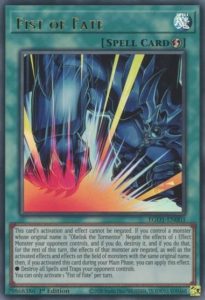 This card’s activation and effect cannot be negated. If you control a monster whose original name is “Obelisk the Tormentor”: Negate the effects of 1 Effect Monster your opponent controls, and if you do, destroy it, and if you do that, for the rest of this turn, the effects of that monster are negated, as well as the activated effects and effects on the field of monsters with the same original name, then, if you activated this card during your Main Phase, you can apply this effect.
● Destroy all Spells and Traps your opponent controls.
You can only activate 1 “Fist of Fate” per turn.

Fist of Fate negates the effects of an opponent’s monster and destroys it. In addition, monsters with the same original name are also unable to use their effects. Fist of Fate has a strong effect to destroy the opponent’s best monster.

In addition, effects and cards are not be activate in response to Fist of Fate. This additional effect guarantees the destruction of an opponent’s monster. Nothing can counter this card after you play it. Fist of Fate can destroy powerful monsters such as Red-Eyes Dark Dragoon.

In addition, Fist of Fate destroys all of the opponent’s spells and traps when you activate it during your main phase. It opens the path for your victory to deliver a direct attack at the opponent. You can inflict massive damage and potentially win the duel.

Obelisk the Tormentor is the most obvious support for Fist of Fate. The spell card requires this divine-beast on the field for its effects. They are dynamic pair of cards. Their effects complement each other.

Play these cards with Fist of Fate!