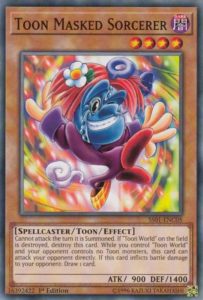 Toon Masked Sorcerer appears in episode 149 of Yu-Gi-Oh! Alister disguised as Maximillion Pegasus, and plays this card during his duel against Seto Kaiba. Then, Alister plays Toon Mask to tribute this monster and special summon Blue-Eyes Toon Dragon from the deck!

Toon Masked Sorcerer is unable to attack during the turn when he was summoned. This effect was added to balance the card. It prevents players from abusing the third and fourth effects.

Furthermore, Toon Masked Sorcerer has 900 ATK. This monster will only deliver minor damage to an opponent. You will need to rely on more Toons to deliver massive amounts of damage.