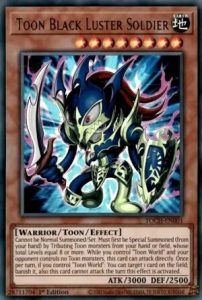 Cannot be Normal Summoned/Set. Must first be Special Summoned (from your hand) by Tributing Toon monsters from your hand or field, whose total Levels equal 8 or more. While you control “Toon World” and your opponent controls no Toon monsters, this card can attack directly. Once per turn, if you control “Toon World”: You can target 1 card on the field; banish it, also this card cannot attack the turn this effect is activated.

The ability to banish cards is always an advantage against any opponent. Toon Black Luster Soldier may banish any card on the field for the price of being unable to attack during the same turn. This amazing effect removes any card from the duel. However, you cannot activate this effect without Toon World on the field.

Furthermore, this ability is sometimes the better option than an attack. You may need to banish an opponent’s card to remove his or her advantage for the long-term outcome of the duel. Many decks cannot regain their cards after you banish them.

Finally, you may use different methods to special summon Toon Black Luster Soldier. A few cards bypass a monster’s summoning conditions. Then, you can have a powerful monster on your field.