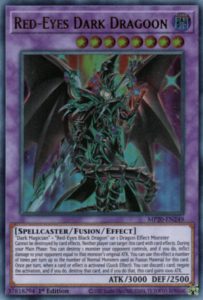 “Dark Magician” + “Red-Eyes Black Dragon” or 1 Dragon Effect Monster
Cannot be destroyed by card effects. Neither player can target this card with card effects. During your Main Phase: You can destroy 1 monster your opponent controls, and if you do, inflict damage to your opponent equal to that monster’s original ATK. You can use this effect a number of times per turn up to the number of Normal Monsters used as Fusion Material for this card. Once per turn, when a card or effect is activated (Quick Effect): You can discard 1 card; negate the activation, and if you do, destroy that card, and if you do that, this card gains 1000 ATK.

Red-Eyes Dark Dragoon symbolizes Yugi’s and Joey’s strong bond as friends and duelists. Their signature monsters, the Dark Magician and Red-Eyes Black Dragon fuse to become the ultimate spellcaster! Red-Eyes Dark Dragoon has three effects to give him the advantage over any opponent. His magic wand vanquishes the opposition in a blaze of destruction!

Furthermore, this effect inflicts a massive amount of damage. You have an opportunity to win the game from this effect. It depends on your opponent’s current amount of life points. For example, Red-Eyes Dark Dragoon destroys two Blue-Eyes White Dragons. Your opponent loses 6,000 life points!

Many monsters with powerful skills are different cards to summon. However, Red-Eyes Dark Dragoon is actually a very easy Fusion Monster to summon. You only need two cards to unleash this almighty spellcaster to turn the duel in your favor!