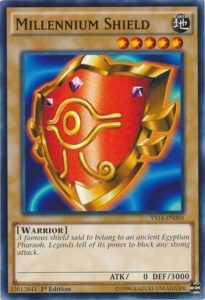 A famous shield said to belong to an ancient Egyptian Pharaoh. Legends tell of its power to block any strong attack.

Millennium Shield was a unique card from the early days of Yu-Gi-Oh!. This card is a defensive monster, and its name speaks for itself. Millennium does not have a single point of ATK and only has a high DEF. It relies on other cards for support due to it is a normal monster with unique stats.

However, Millennium Shield requires one monster for a tribute without any offensive abilities on its own. One tribute for a monster without an effect and ATK is not a wise use of your resources. You are not gaining any major advantage.

Millennium Shield relies on support from other cards because it does not have an effect. You need to create combos to effectively play the Millennium Shield. Warriors have generic cards with effects for strong combs.

Weapon Change is a similar spell card. Weapon Change switches the ATK and DEF of a warrior or machine until the end of the opponent’s next turn for the cost of 700 life points. Millennium Shield may have 3,000 ATK for every turn if you are able to pay the cost.

Play these cards with Millennium Shield!

Overall, Millennium Shield is one of the worst cards in Yu-Gi-Oh!. Its’ 3,000 DEF is a deceitful stat because it offers little value. Opponents can easily destroy it with a card’s effect. The combo with Shield & Sword is not going to win many games. I only recommend placing a foil version of this card in your binder.