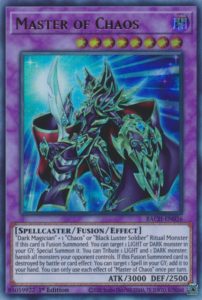 “Dark Magician” + 1 “Chaos” or “Black Luster Soldier” Ritual Monster
If this card is Fusion Summoned: You can target 1 LIGHT or DARK monster in your GY; Special Summon it. You can Tribute 1 LIGHT and 1 DARK monster; banish all monsters your opponent controls. If this Fusion Summoned card is destroyed by battle or card effect: You can target 1 Spell in your GY; add it to your hand. You can only use each effect of “Master of Chaos” once per turn.

The stellar artwork for Master of Chaos has inspiration of a fusion between Dark Magician and Black Lust Solider. It is the perfect design for this fusion monster because it fits the theme. The Dark Magician is wearing armor the same style as Black Luster Soldier.

Master of Chaos establishes your field and strategy. This fusion summon special summons one light or dark monster from your graveyard when you special summon this fusion monster. It is an effective ability to gain a monster for free. You may reapply one of your monsters from early in the duel.

Master of Chaos controls the field with his powerful second effect. This spellcaster tributes one of your light monsters and one of your dark monsters, and he banishes all of your opponent’s monsters. Master of Chaos demolishes the opponent’s strategy and removes their resources from the game.

Therefore, you have a path to victory. The opponent has a field without a single monster. Master of Chaos and your additional monsters may directly attack the opponent. They can deliver massive damage. Master of Chaos inflicts 3,000 points of damage from a direct attack.

Furthermore, this effect has a devastating ability against opponents with swarm decks. These decks rely on a field with many monsters. Master of Chaos perfectly counters these decks because he banishes all of these monsters.

However, opponents can avoid this effect when they prevent the summons of your light and dark monsters. Opponents can play cards such as Trap Hole to destroy a monster when you summon it. Master of Chaos requires monsters with these attributes. You are unable to activate this effect without the two monsters for the tribute.

Furthermore, you can add any spell card from your graveyard to your hand. This condition provides a lot of options. You can add cards such as Monster Reborn and the Spellbook of Life to your hand.

Play these cards to fusion summon Master of Chaos!

Master of Chaos perfectly fits in the archetype of Dark Magician. This spellcaster has solid support. Dark Magician’s support, Spellbook, and generic cards support Master of Dark Chaos. You can consistently play this fusion monster and create strong combos.

Play these cards with Master of Chaos!

Overall, Master of Chaos is one of the best fusion cards for Dark Magician. This spellcaster has useful effects. You gain many advantages from this card. Master of Chaos special summons a light or dark monster from your graveyard and banishes the opponent’s monsters. I recommend playing at least one copy of Master of Chaos in your extra deck.